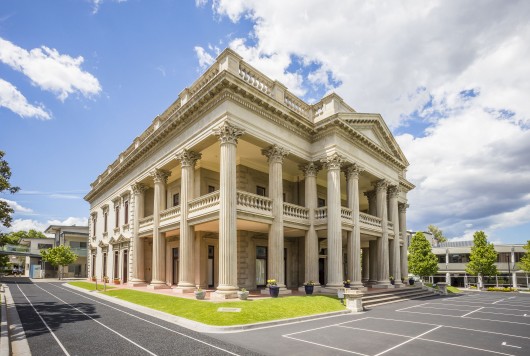 Posted on 20 August 2021 by Elisabeth Rhodes

Last week, the Chaplain, the Deputy Principal and I attended the Anglican Schools Australia conference, a biennial event which brings together leaders of Anglican schools across the country for two days of professional learning, discussion and worship. This year, the conference was titled “Intersection” and this theme was explored through a variety of speakers who prompted us to think about the ways in which our school communities were “intersecting” with issues such as domestic violence, homelessness, climate change and faith. There was a poignancy to the theme also, as we were not able to come together in Melbourne face to face, but instead undertook the conference virtually.

There were some particularly interesting speakers. Major Brendan Nottle (Salvation Army and Collingwood Football Club Chaplain) spoke about the importance of entering the “intersections” about which we might make decisions, listening when we enter these spaces and only speaking in ways that will promote understanding. He challenged attendees to invite people into our conversations that might not usually be there and to be interface creators who gather different groups of people together for dialogue. He also reminded us of the importance of self-care which is vital if we are going to function well in assisting others.

Mr Jamie Isbister, Australia’s Ambassador for the Environment and head of the Economic Growth and Sustainability Division in DFAT, spoke about the work he is responsible for in promoting and protecting Australia’s national interests on global environmental issues, including through leading Australia’s negotiations under the United Nations Framework Convention on Climate Change. Following the sharing of Jamie’s insights, the film made by Richard Keddie (instigated by Bishop Philip Huggins) of Lowther Hall students singing What the World Needs Now is Love was played for the conference delegates. It was very well received. Another highlight of the two days was the service which was delivered virtually, featuring students from across many Anglican schools in Melbourne. The sung blessing, which students had individually recorded from their homes, was a particularly moving inclusion and will be shared with the Lowther Hall community later in the year.

The Conference also built on the work of the Reverend Dan Heischman (National Association of Episcopal Schools (NEAS), New York) relating to Anglican identity through two workshops with Ann Mellow (Associate Director, NEAS) and Richard Browning (Director of Mission, Anglican Schools Commission, Southern Queensland). These interactive sessions provided a framework for us to work together within our own school groups to reflect on the ways in which our Anglican purpose and identity can be seen through all aspects of school life. At Lowther Hall, what we do and what we value is informed by the fact that we are an Anglican school. As an Anglican organisation, we see the purpose of education not simply as helping girls to gather knowledge and skills, but also to gain wisdom and dignity and to see themselves as a divine creation. We seek to foster a disposition of service within our community and our school motto, not for ourselves alone, is a clear reflection of our Anglican foundations. We are also an organisation that invites and celebrates dialogue and exchange of ideas – a long Anglican tradition, be it in the space of interfaith exploration or through rigorous debate and discussion pertaining to topical issues. Finally, as an Anglican school, in times or darkness and difficulty, we are a community of hope, sustained by the notion that the light will eventually overcome the darkness and that salvation and redemption will come. I hope that in these challenging times, our Anglican traditions and rituals can provide a positive framework from which to look ahead with optimism.