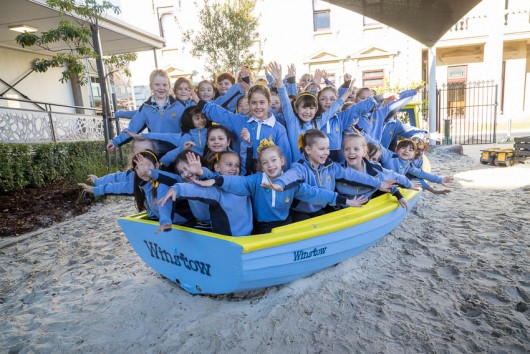 Driven by their curiosity about the world around them, as well as the history of Lowther Hall and what makes a community, our Year 1 girls embarked on a project this year that began when they attended our Founder Day Assembly in February. At this event (that celebrates Lowther Hall's birthday and Founder, Henry Lowther Clarke), the girls learned about the role of the School Council in decision-making for the School, and decided they should create a council of their own! Once established, they wondered about what decisions for Lowther Hall they should make. Knowing that their area of the School was named after one of our predecessors, 'Blinkbonnie Ladies College', they were intrigued to know why nothing at the School was named after our other predecessor, 'Winstow Girls' Grammar'. This would be their first decision: to name something after 'Winstow'! But what? After a series of votes they agreed that their nameless playground boat should be named 'Winstow'.

This led the girls to work through processes that included: seeking approval for their proposal via a meeting with our School Council, designing a logo and font style for the boat by researching old Winstow uniforms and liaising with a designer, engaging with staff members from events, facilities and marketing to further refine their plans, and finally, planning their big reveal event which included a special assembly, musical performance, ribbon cutting, and reveal of their new boat name!